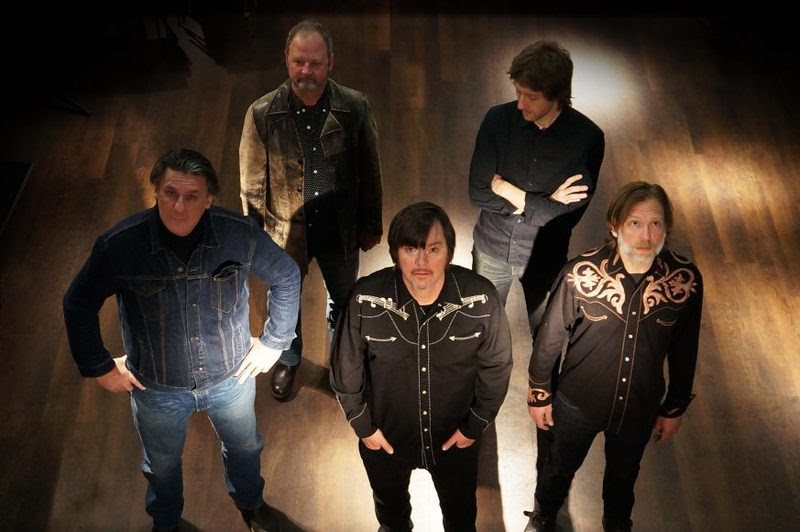 On Son Volt’s new record, Union, present and past mingle into strong confluence. The thirteen new songs written by founder Jay Farrar confront our turbulent politics and articulate the clarity and comfort music can offer in the tumult. “There are so many forces driving our country apart,” observes Farrar. “What can we do to bring our society back together?”

The country and blues sounds explored by Son Volt on its last two records (2013’s Honky Tonk and 2017’s Notes of Blue) linger in the grooves of Union. But the new record nods to many other mile markers along the band’s 25-year path. Some tunes offer a powerful return to the ringing lyrical clarity of 2005’s Okemah and the Melody of Riot and 2007’s The Search. Others hearken back to the freewheeling poetic melodicism of 1994’s Trace and 1997’s Straightaways.

“Broadsides will be hurled to capture the truth,” sings Farrar on the brooding and blues-driven song that takes its name from the one-page bulletins that used to spread both proclamations and ballads. And songs such as “The 99,” “While Rome Burns,” and “Lady Liberty” push up the acoustic guitar in the mix to underscore the enduring role of troubadours in troubled times. “A lot of these songs are songs of turmoil,” says Farrar. “Questioning what’s going on.”

On Union, Farrar taps into folk music’s rich lyrical legacy. It’s a tradition he has tapped often both in Son Volt and in Uncle Tupelo. “I was raised on folk music,” observes Farrar. “Politics is a common thread there. In a time where we see threats to our way of life, and our democracy, from within, you say: What can I do? I put pen to paper and write music.”

The chorus of Union’s title song was a “mantra” of James Paul ‘Pops’ Farrar, about whom Farrar has written so affectingly in his memoir, Falling Cars and Junkyard Dogs. “He thought the Israeli model was best,” says the songwriter. “Everybody serves in one capacity or another, and that was the best way to bring a country together. It did happen here in World War II. People of different spiritual and economic backgrounds brought together. And there was an immense period of prosperity after that – for a myriad of reasons, but the idea that all walks of life were working together is important.”

Union grounds its politics in startling images and portraits of the human costs of our divides. Guitar and organ commingle on “While Rome Burns” to underscore a connectedness in the way that “the freeways lead to the gravel roads, to the town squares and the rodeos.”

The mournful shuffling “Reality Winner” echoes direct protest songs such as “Hurricane” – Bob Dylan’s ode to boxer Rubin Carter, who was wrongly convicted of triple homicide in 1967. Winner is a former intelligence analyst who leaked a National Security Agency document that detailed Russian attempts to hack voting systems to the media. She was convicted of violating the Espionage Act and sentenced to five years and three months in prison.

“We have a reality TV show president,” Farrar says, “and we have this woman named Reality Winner, and they’re linked in a way. She represents everything that you want in an American, someone who’s learned three languages and does her part. She’s basically a whistleblower doing hard time. Maybe this song brings more awareness to her plight.”

Frame – who toured with Son Volt in the Okemah era – rejoined the group for the Notes of Blue tour and plays on the new record. DuPlantis recruited fellow Austin musician Mark Patterson to play drums and percussion.

“We spent a lot of time together playing shows behind Notes of Blue,” says Farrar. “That time playing together coalesced into a sense of purpose.” The Son Volt leader’s return to playing acoustic guitar – after taking up electric guitar on the band’s last record – also had an impact. “I took a step back,” says Farrar. The space allowed Frame “to add a lot of guitar elements.” The result is “a different flavor and perspective.”

Initially, Farrar intended Union to be an explicitly political statement. “Midway through,” he says, “I realized I needed some balance on the record.” The result is a cluster of new songs that reflect on the power of love, time, and music to heal and sustain us. “Holding Your Own” builds to a shimmering and powerful climax of piano and electric guitar as it relays the hopes Farrar identifies in “watching kids grow up and find their place in society.”

“Slow Burn” is an ode to hope and resilience’s power to shake off darkness. The song’s piano chords pave a road out of futility and reminds listeners that “every tunnel reaches the light.” Another highlight on the record is “Devil May Care” – an ebullient celebration of the joys of playing music. Farrar strip-mined musical gear catalogues for the poetry in their terminology, reeling off lines like “harmonic fidelity boost high pass filter on a balanced line / Or a cigarette on a headstock, all the same just make it rhyme.”

The attitude of bands such as the early-era Replacements was present as he wrote the song. “That is the essence of what a band is,” he says. “You remember: Wait a minute: Music is supposed to make you throw your burdens to the wind, so I tried to include that approach as well.”

Eight of the thirteen songs on Union were recorded at places associated with two figures in American history who Farrar says “made a difference”: Renowned American labor activist Mary Harris “Mother” Jones and quintessential American troubadour Woody Guthrie. Three songs were laid down at the Mother Jones Museum in Mount Olive, Illinois, while four others were recorded at the Woody Guthrie Center in Tulsa, Oklahoma.

“I felt doing it in a more challenging environment might inspire us along the way,” says Farrar. “Doing mobile recordings was a way to push myself a little bit. It also pushed Jacob Detering, our engineer, who had to assemble a mobile unit and did a great job.”

Proximity to Guthrie and his legacy pushed strongly into Union’s closing song: “The Symbol.” The song’s point of origin was Guthrie’s 1948 poem “Plane Wreck at Los Gatos,” which was later set to music by composer Martin Hoffman and is best-known as “Deportee.” Guthrie wrote at a moment when “workers needed to work fields weren’t even considered as people,” observes Farrar.

In “The Symbol,” Farrar paints a compelling portrait of a Mexican man who helped rebuild New Orleans after Katrina and now finds himself buffeted by the wave of anti-immigration rhetoric and vengeful law enforcement.

Farrar says that the key to writing songs on topical issues that stand the test of time is to be a truthful observer. “‘Deportee’ made such a lasting impression on me,” he observes. “But it was written in the 1940s You have to give your own take. Say this is what happened. Even if it seems temporary. Hopefully it’s not.”

Field Report:
Wisconsin's Field Report center around the narrative songs of Chris Porterfield (the band name is actually an anagram of Porterfield's last name), songs that, at their best, recall the writing and feel present on albums like Bob Dylan's Blood on the Tracks, Bruce Springsteen's Nebraska, and Paul Simon's Hearts and Bones in their hushed and passionate detail. Born in Minnesota, Porterfield moved to Eau Claire, Wisconsin, where he was a member of the folk-rock group DeYarmond Edison with Justin Vernon, Phil Cook, Brad Cook, and Joe Westerlund. When the band decided to relocate to North Carolina in 2006, Porterfield opted to stay in Wisconsin. Vernon eventually left the band, going out on his own under the name Bon Iver, while the remaining members of DeYarmond Edison became the freak folk outfit Megafaun, and both incarnations had critical success.

Porterfield, who had never really written songs before, spent a couple years writing a batch of songs on guitar, refining and reworking them, trying them out at open-mike and songwriter nights in Milwaukee, where he now lived, under the name Conrad Plymouth. In time Porterfield assembled a band, which included Nick Berg on keys, Travis Whitty on bass, Damian Strigens on drums, Jeff Mitchell on baritone guitar, and Ben Lester on pedal steel. Field Report were born, and the band developed a sparse, hushed, and intimate backdrop to Porterfield's intricately detailed and very lyrical narrative songs, the best of which, like "Fergus Falls," "I Am Not Waiting Anymore," and "Route 18," conjure up Nebraska-era Springsteen, Blood on the Tracks-era Dylan, or the long epic personal passion songs of Leonard Cohen, and sometimes all of these at once. 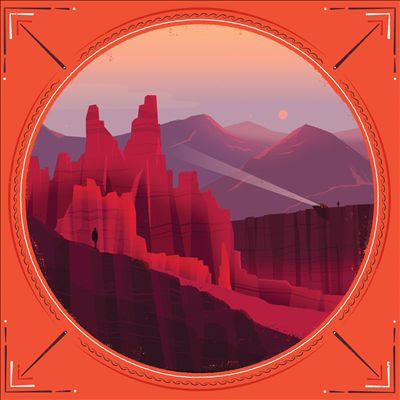 Vernon and Porterfield touched base when Bon Iver toured in Milwaukee; Vernon offered Porterfield the use of his April Base studio in Eau Claire when Field Report were ready to record, and in December of 2011, the band met at April Base and recorded a self-titled debut album with engineer Beau Sorenson. The project was then mixed by Paul Kolderie in February 2012 and appeared from Partisan Records the following September, garnering almost immediate critical acclaim. The band's sophomore long-player, the Robbie Lackritz-produced Marigolden, followed in 2014. Returning in January 2018, Porterfield channeled the anxiety of becoming a new father into the band's deeply personal third album, Summertime Songs. 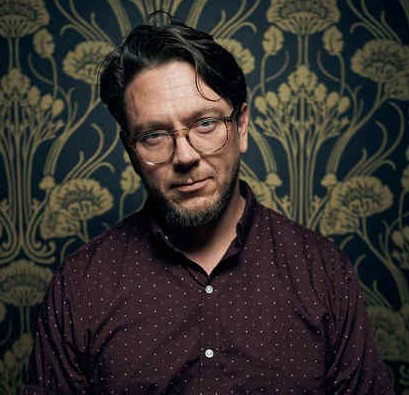 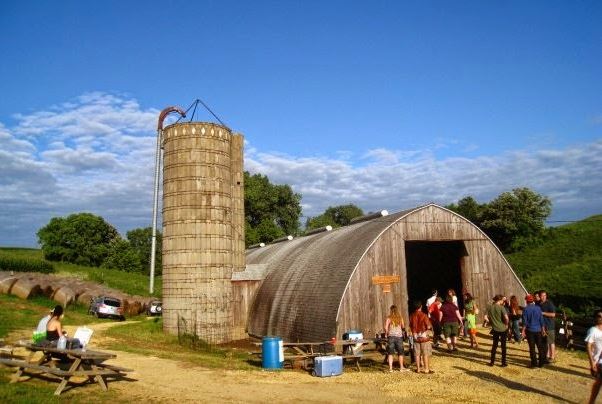 Music to start around 8:00 pm. Tickets are just $25 in advance and $30 day of show at the door. Please get your tickets in advance as they are likely to sell out. Buy tickets | Codfish Hollow Barn (codfishhollowbarnstormers.com)