"This exhibition shares some of the essential stories that every Iowan should know about who we are and what we've achieved since Iowa became a state more than 170 years ago," State Historical Society of Iowa Administrator Susan Kloewer said. Like a visit to your grandparents' attic, the exhibition unpacks stories of Iowa's past with nearly 50 artifacts, including:

¨ A battered hat from a coal miner in Marion County

¨ An Olympic medal from sprinter Natasha Kaiser-Brown of Des Moines

¨ As a bonus, Mike Wolfe, the creator and star of the hit television series “American Pickers,” lent his voice and video talents to the exhibition’s multimedia elements. A native of Le Claire, Wolfe has a long-standing interest in history and a knack for using artifacts to unlock its stories. 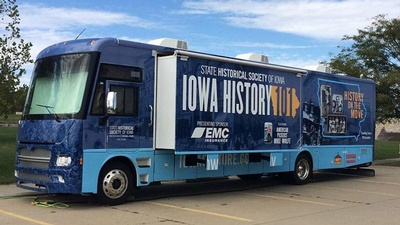